Part of my blog will include trip reports from various adventures I’m inclined to embark on. Yesterday was one such adventure.

I’ve done some hiking in the past, mostly a few years ago when I was in much better shape physically. Hiking is one of those things that I love and I hate. I love the idea of hiking. I love hiking after I’ve hiked. But during the hike, depending on the hike, I often hate hiking. And, I often hate myself for even considering the idea of hiking when I could be using my time much better at home on the couch.

If I’m going to hike, I prefer to hike something difficult. Having completed a few difficult hikes in the west over the last few years, I had the idea in my head that there was nothing particularly difficult about any trail in Arkansas. A good friend of mine, Greg, is getting into hiking as well and we’d done a few miles at Kessler Mountain in Fayetteville a few weeks ago. That’s actually a pretty cool trail, but even though we hiked it wet, I didn’t find it very difficult. So when selecting our next hike, I happened upon Hemmed In Hollow near Compton, AR. Trail reviews had it listed as “Strenuous” and “Difficult.” I patently disregarded those tags, since of course there are no particularly difficult trails in Arkansas. Nevermind that I had hiked another fairly difficult trail, Pinnacle Mountain, 2 weeks ago.

The trail is about 5 miles round trip, out and back, with an optional side trip down to the Buffalo River (another 1 mile or so). That’s if you hike from the Compton trailhead. There are many other trails in the area which, I think, mostly connect up and you could probably spend weeks hiking in the Buffalo River area and not cover the same trail twice.

I woke up around 4:30 am and got my stuff ready (printed a trail map, filled my Camelbak, etc). I met Greg and his son Caleb in Springdale at 6:00 am and we set off on 412 East after McDonald’s breakfast. I happened to be test driving a 2013 GMC Sierra, so thanks to the fine folks at Everett Maxey GMC, the drive was quite enjoyable and the scenery in the area is nice.

We arrived at the trailhead at 7:30 am and set off. A short distance down the trail we were greeted by a friendly ambassador 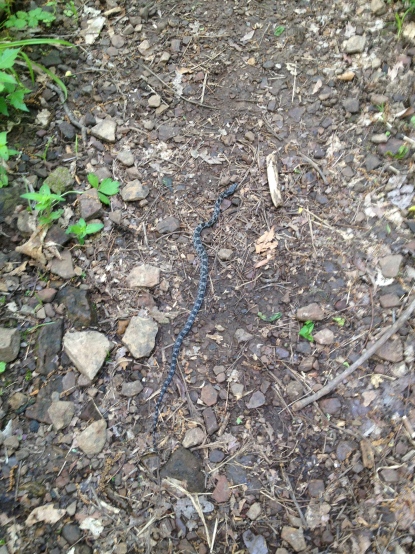 Caleb said it was a copperhead. I don’t know much about snakes but am of the firm belief that the only good snake is a dead snake. Unfortunately, we didn’t have any good snake-killing tools with us, so I poked him with a [long] stick in an effort to persuade him to move off the trail. Apparently poking him only angered him and he coiled up and considered striking at me. As I kept a cautious eye on this serpent, Greg went to search for a longer stick. About the time he returned with about a 10 foot pole, the snake decided I wasn’t worth biting (or, that I was too big and intimidating), and slithered off the trail. Now, that snake was less than 2 feet long. We continued down the trail, mindful that the snake may well have told his mother that I had poked him, and his Anaconda-sized mother might be waiting to ambush me at any moment.

The trail drops well over 1000 ft, most of that in about a mile. The trail was alternately dry and in a few places, quite muddy. In many places, there were steep muddy, sliding-type of descents and mud-covered steps, likely carved/placed here 80 years ago by the CCC. My boots don’t seem to have much traction in the best of conditions and certainly not in the mud. Luckily none of us slipped and hurt ourselves. The steep descent altogether wasn’t that hard, but I knew that going up would be tough. I just didn’t know how tough.

There are a couple spots to gain a good view out over the mountains. Here’s one shot I snapped about halfway down.

We happened upon a large rock formation that had a cactus growing on top (look really close and you might see it in the picture). There were several cacti along the trail. One has the idea that cacti only grow in dry, desert-like places and this forest was anything but dry. Go figure.

Almost 2 miles in, the trail comes to a T and you have the option of going down to the Buffalo River, which adds about a mile or so to the hike. We opted to do this first. We ended up at Sneed’s Creek just before the Buffalo, but didn’t end up crossing the creek and going all the way down to the river, probably a couple hundred yards down. Crossing the creek might have resulted in wet feet at least for the other guys, and we didn’t want to hike all the way back with wet feet. Here’s a couple shots of the creek. 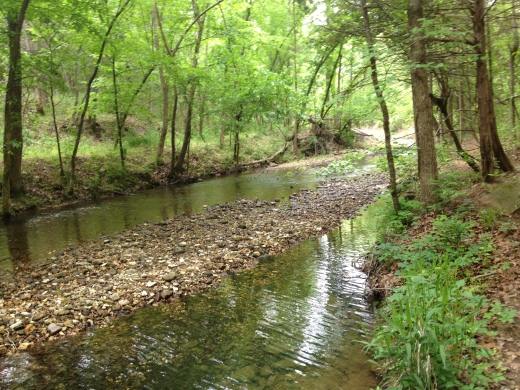 We made our way back up to the T and then continued on towards the waterfall. Check out Hemmed In Hollow Part 2.